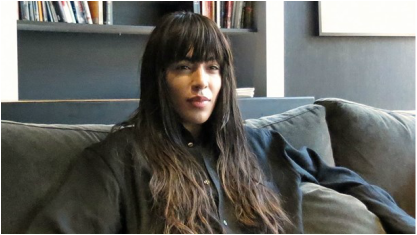 
I: "It's a bit un expected that you're going to do a Christmas show, how come?"
L: "Eeeeeeeeeh. Was that a good answer? *laughs* No but, I've never really seen it as a classical christmas show. This is going to be something different from a christmas show."
I: "And what is it that is 'different'?"
L: "Well what I like about christmas, it's the atmosphere and the community, I'm not so much for presents and the hysteria, I'm not so much for the christmas stress, more the atmosphere, so what's going to be very different is atmosphere and community, that's what I wanna spread. So it isn't that unexpected! We just don't need to call it "Christmas" show'."
I: " Now you've been here and rehearsed for three days, right?"
L: "Yeah, from the beginning I chose 2 days but then I gave it an extra day because it has to be good also.
I: "And how does it feel?"
L: "It feels nice, it's a nice group of people actually, real creators. And that's also one of the reasons I did this. Because there is a certain credibility there, people who love what they do."
I: "So, it is in Malmö, at Moriska paviljongen, and was Moriskan who made you give in a bit?"
L: "Yes, yes, first I was like ' no not Julgalan, I need time to focus on the album who's coming out in January, it's so much work behind it, but then they told me "This is actually pretty artistic Loreen" and that's the word that triggers, "artistic, do you mean I can do whatever I want??" *laughs* so I actually went to research and saw the premises and thought this is niice, we could do something cool with this. As long as I have free hands and can do whatever I want, because that's a creators dream, then it's just giving. Then you develop."
I: "And it's not just musicians that preforms with you?"
L: "No it's circus people, acrobati.. I don't get how they do that, they don't look that strong, but then they stand on their little finger without any problem, I don't get it..."
I: "That's really a show."
L: "Yeah but with a softer tone. There's no "show(what?)" dadada... Nothing like that, we need to slow down the pace a bit."
"I: More atmospheric?"
L: " Yeah I would say that. And it's... Yeah if I say like this 'It's not a sunrise , it's a moonlight.'"
I: " Okay, that summarizes everything pretty well. But hey, since 2012, have u been touring around with Euphoria all the time?"
L: "Y..eeah... More or less I would say... Or toured with... Or what's funny is that it's not only euphoria.. but the album Heal actually. Which I'm surprised of. Usually they want you to skip all the other songs and just go for 'EUPHORIA'! *laughs* from the beginning at least. It has happened sometimes. 'EUPHORIA', 'No I'm performing another song right now, be quiet.' 'EUPHO...' *laughs* No but, it has been full.. on, since 2012. Good practicing I have to say."
I: "Do you ever get tired of it?"
L: "No, That's the crazy part, I don't get tired of it at ALL. I think that... Because I like... ops sorry, It's me who sits and pokes here... Singalong. Because it's not often I sing the song all alone. I can always hand it over to the audience! *laughs* And they.. Often sing along. They're often the ones that actually sings the song. So I use to tell them, now you'll get to sing the song, and they don't complain."
I: "What do you think about Malmö then?"
L: "I like Malmö, it's a soft tone over Malmö, if you compare to Stockholm who has a pretty hard tone, people smiles on the streets, they're nice, there is a playfulness here that I can miss sometimes so... No but I like Malmö. And then one happens to stay at the same hotel as the whole soccer team. *Sounds uppish*"
I: " Yeah it's full throttle here."
"FULL throttle, it's funny that I came in here and was like 'ah omg how many fans I have!' *laughs* And then I knocked on the door and was like 'hey can't I come in?', 'Noo, we don't let people in here, who are you?', 'But hello? *laughs* It's MEEE', the ego. *laughs*"
I. "For how long are you going on with this show, it's only in Malmö, right?"
L: "Yes, it's only gonna be here. We can't bring Moriskan everywhere, that doesn't work! *Laughs*. During one month, we're having this show, 3 days here, this week. And then... Don't ask me which days... I'll gamble now but 2 days next week and.. maybe 2 more days the week after that..."
I: "It's going on for a while and you'll be here in Malmö.."
L: "I love it. I love it! To be at the same place all the time, or well it won't be like that on all of my free days, sometimes I'll need to be at other places, so I have a looot to do, let's see if I get this all together."

Loreen in an exclusive interview with Nyheter24 of broken relationships, separation anxiety and love.

Loreen Talhoui, 28, do not drink alcohol, but sings in the new song "Crying out your name" how she emptied the mini bar to escape from a broken relationship.

- I depicts a woman who has been heart broken, and she chooses to use the bottle to calm her separation anxiety and the pain of being separated from someone. The battle was lost. It did not work, she says and continues:

- The reason I have chosen to highlight alcohol as an escape is because it is like that for many, not for myself, but I have seen people around me, and there is no right or wrong in it. But I wanted to highlight the vulnerability behind it.

But it is not difficult to relate to it when you do not drink?
- For me it is not. It is not the alcohol that's the point of it, but it is to be heartbroken and I've been. For me to know that things do not work ... Most of my album is about love relationships, separation and acceptance. Like that chimeras have as infidelity. Very strangely about it. Usually it is not that I am pointing finger at someone else and say like "you did this to me", but it is from my own point of view.

Are you still heartbroken?
- No, I'm actually not heartbroken at all. But it's interesting what comes up when you sing, I end up in some kind of trance. There is much pain that comes out again then.

Are you perhaps instead in love again?
- No, or I'm in love with love. I love love. But right now I'm not in love, and we should be damn happy about that. Because I am a true romanticist!